The Twin Cities of Tonawanda and North Tonawanda at the western terminus of the Erie Canal are two separate cities, in two separate counties, with the Erie Canal as a centerpiece that both separates and connects them. Like other communities along the Erie, the prosperity of the Tonawandas rose and fell with the growth and decline of manufacturing in upstate New York. But the tale of these two cities is a promising one for all small cities and villages along the canal. Decades of planning, robust citizen engagement, and waterfront investments have catalyzed the rebirth of the Tonawandas from rust belt communities to a vibrant gateway to the Erie Canal.

What makes it great?

Complex Planning, Public and Private Investment, Years of Follow Through
The complexity of bringing two communities together to collaborate on a shared vision was not easy. Beginning with the 1995 NYS Canalway Recreationway Plan, the Tonawandas began to craft a road map for prioritizing and funding key projects that would transform both sides of the canal. Projects included: developing 1,000 feet of dockage and amenities for boaters, creating paddlesport access, converting an adjacent street into pedestrian-only green space with passive and active recreation, developing a network of trails, attracting mixed-use commercial development, designating a downtown historic district, and connecting the harbor with adjacent downtowns.

A Regional Waterfront Destination
Formerly degraded and abandoned canalfront property with limited public access has been completely transformed into a regional destination. A full season of events, including Canal Fest of the Tonawandas, attracts hundreds of thousands of visitors annually. Visitors to Niagara Falls and Buffalo are drawn to waterfront restaurants, local attractions, and recreational opportunities at Gateway Harbor, extending their stay and boosting the economic impact of tourism in the region.

Two Communities, One Campus
Gateway Harbor is a symbol of the Erie Canal's enduring ability to connect places and people. By crossing county and community boundaries, Tonawanda and North Tonawanda created a single campus that unites north and south by water and enhances both communities. Gateway Harbor has sparked reinvestment in long-abandoned commercial properties along the waterfront and attracted new businesses to both cities.

This project received bundled funding from several sources—$700,000 from DOS Local Waterfront Revitalization Program (LWRP); $403,000 from a $2.5 million grant to the City to revitalize the downtown from the Buffalo Billion Smart Growth Community Fund; and $100,000 from the Canal Corporation's Canalway Grant Program. Additional funds were awarded in 2019—$372,150 from LWRP; and $100,000 from Canals—to extend the Canal bike path two miles to provide a continuous trail along the canal from Gateway Harbor to the Botanical Gardens Park. 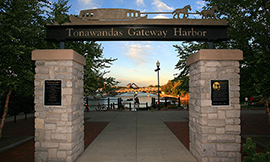 Gateway Harbor is just 12.5 miles from Niagara Falls State Park. Start your trip to the Erie Canal, Niagara Falls, and the City of Buffalo from the Tonawandas.