Get close to the water and experience New York's canals by kayak, canoe and stand-up paddleboard. The NYS Canalway Water Trail is comprised of 450 miles of canals and interconnected lakes and rivers. It includes the Erie, Cayuga-Seneca, Oswego, and Champlain canals. With more than 140 access sites and several boater-biker-hiker facilities that allow overnight camping at canal parks, it's easier than ever to enjoy the waterway. 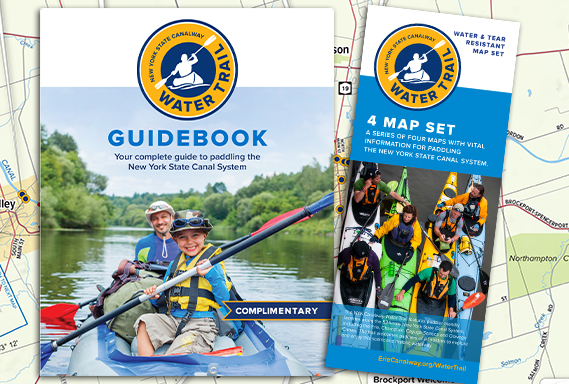 Launch your paddling adventure with this mile-by-mile guide to the entire NYS Canalway Water Trail. 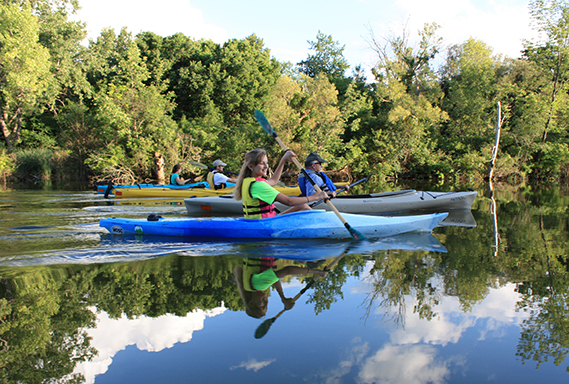 Find great day trips for every section of the waterway. 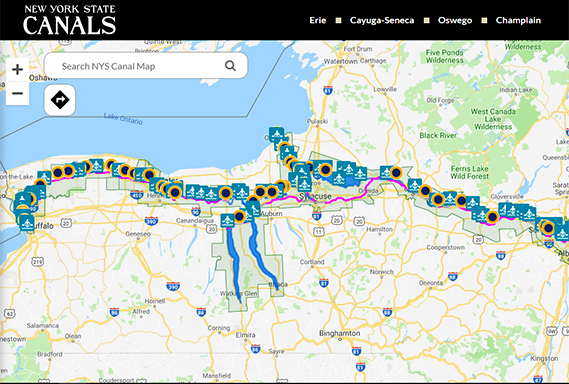 Use the online map to find launches, amenities, sites of interest, and more.

Paddle the Canals: ON the Erie

Join us at Mercer Memorial Park in Baldwinsville, travel through Lock E24, and explore the Erie Canal/Seneca River as we head to Onondaga Lake on this 5.5-mile guided half-day trip. We'll gather for a picnic lunch at the Willow Bay Shelter at the end. $30 registration includes shuttle and lunch. Kayak rentals are available for a fee.

The NYS Canalway Water Trail offers paddlers a wealth of places to visit and sights to see. You'll navigate century-old locks, pass stunning stone aqueducts used to carry boats over rivers and streams in the 1800s; paddle alongside tugboats and cruisers; and experience narrow flatwater stretches and wider river segments. For a constructed waterway, the canal is surprisingly serene and natural. You can expect to see a diversity of birds and wildlife, unique geology, and varying terrain.

Can paddlers go through the locks?

Yes. Going through a lock is one of the unique aspects of paddling on the canal. Alert lock operators by cell phone. Telephone numbers are listed here. If you have a handheld marine band VHF radio, contact lock operators on channel 13 and other boaters on channel 16. If you are renting a kayak or canoe, you can ask the rental operator to call ahead for you. It takes about 15-20 minutes to lock through.

How much does it cost?

It's free for paddlers to go through the locks.

What do we need to bring?

Always wear a personal flotation device. You are required to wear one in a lock. We recommend you wear it always. Protect yourself from the sun with suntan lotion and a hat and bring snacks and water. It is very important to stay alert and hydrated while you are on the water.

Can I get advice or connect with other paddlers?

Paddlers are sharing information, asking questions, and meeting others who share a passion for paddling the canals on the New York State Canalway Water Trail paddling group on Facebook. With nearly 1,600 members, this peer-to-peer group is a great place to get inspired for a paddling adventure. Join the conversation: https://www.facebook.com/groups/NYSCanalwayWaterTrail/

Fishing is allowed; you need a valid fishing license from the Department of Environmental Conservation. Bass, pike, and walleye are common catches; trout fishing is popular on the Oswego Canal and on Seneca and Cayuga Lakes.

Is there a current?

Yes. Even though it is a canal, there is noticeable current in most places. Plan accordingly. If you plan to launch and end at the same place for a day trip, go upstream for the first leg. It makes getting back at the end of the day much easier.

Be careful around dams, if you are paddling one of the river sections. The movable dams in the Mohawk River are easy to spot from a distance. Low fixed dams can be hard to see when approaching from upstream. Most dams have a line of orange balls upstream. NEVER go below the markers. Be careful after floods, the safety balls sometimes get displaced.

Follow the buoys: "Red on the right when returning from sea" is standard convention. That means that red markers will be on the LEFT side of the channel when you're paddling east (and generally downstream) on the Erie, south on the Champlain, and northeast on the Cayuga-Seneca Canals. Red buoys are on the right side of the channel on the Oswego Canal.

How far can we go? How long does it take to go end to end?

The NYS Canal System consists of more than 524-miles of interconnected canals, lakes, and rivers, including the Erie, Champlain, Oswego, and Cayuga-Seneca Canals. You can paddle all of it. Paddlers going from end to end of the Erie Canal typically plan 2.5 to 3 weeks to make the 338 mile journey. For day or weekend trips, choose mileage that will be comfortable for you to cover in a day-- and leave time to stop and explore on land as well. It takes 15-20 minutes to go through each lock, so be sure to add time for locking too. If you are new to paddling, test the waters with an hour or two of paddling.

How many miles is each canal?

Can we get a lesson?

Many paddling rentals offer a variety of lesson packages or tips to ensure you are comfortable before heading out.

Many Thanks to Our Sponsors!

The NYS Canalway Water Trail Signage Project was prepared with funding provided by the New York State Department of State under Title 11 of the Environmental Protection Fund, as part of Montgomery County's Kayak Share Project, and by the NYS Canal Corporation, both as part of the state's Regional Economic Development Council Initiative. In addition, critical support was provided by the National Park Service.

® I LOVE NEW YORK is a registered trademark and service mark of the New York State Department of Economic Development; used with permission. 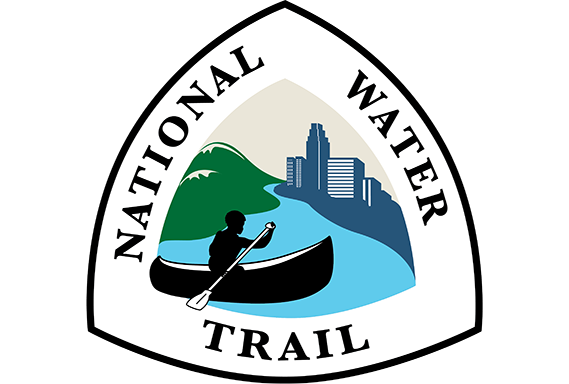 What an honor! The NYS Canalway Water Trail is a National Water Trail. 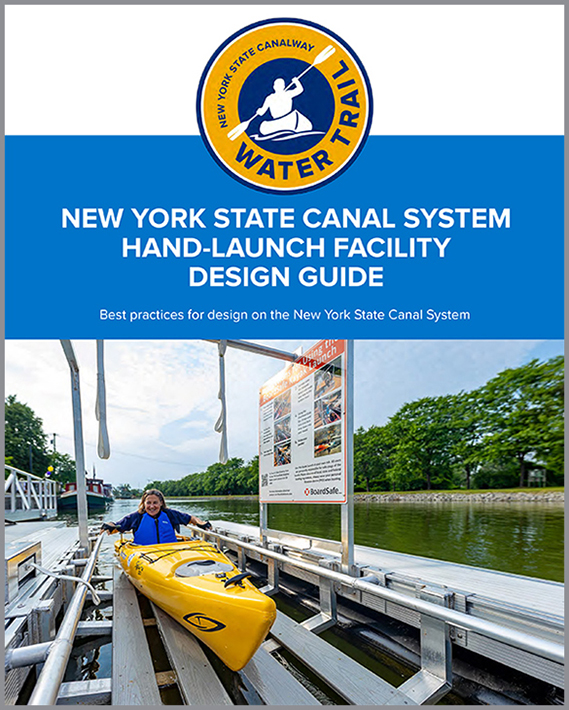 The guide shares best practices for communities and organizations looking to install hand-launch facilities for paddlers on the NYS Canal System.