An 1800s canal lock—200 feet of perfectly laid stone—lay abandoned by the side of the NYS Thruway. A long-shuttered tavern that once bustled with canal travelers stood empty next door. What if…the site could become a monument to the Erie Canal? What if…it could educate thousands of travelers about New York's momentous canal heritage?

For a small group of dedicated canal enthusiasts, advocates, and scholars, those questions and the heavy lift it would take to fulfill such a vision became a 20-year enterprise. The Canal Society of New York State, in partnership with the NYS Thruway Authority, NYS Canal Corporation, Federal Highway Administration, State Historic Preservation Office, NYS Department of Transportation, and Cayuga County, opened the doors to Erie Canal Heritage Park at Port Byron in 2016. Together, they created a historic attraction that draws tens of thousands of visitors each year.

What makes it great?

Preservation of Authentic Historic Resources
Years of perseverance, fundraising, and sweat equity provided by the Canal Society of New York State are behind every facet of the Park. Visitors begin at the park's visitor center, where displays of historic canal objects and an 1893 large-scale lock model orient them to the site. They are then invited to walk through the massive stone structure of Lock 52, built in 1853, and tour the restored 1894 Erie House Tavern & Hotel, mule barn and blacksmith shop. Interpretive signs and volunteers share information and stories about the 19th century waterway.

Access and Impact
Located along the NYS Thruway between exits 40 and 41, the park is accessible from a dedicated eastbound Thruway exit, as well as from NY Route 31 in Port Byron. In 2019, patrons came from every state in the nation and 60 countries. The park's unique location enables the Canal Society to reach a whole new audience. Travelers who might not otherwise take the time to stop for an off-route historic attraction, are introduced to New York's canal heritage and to the many places where they can visit the canal today.

Unlikely Partners
The park links adjoining properties owned by the Thruway and the Society; under contract, the Society manages the visitor center, the Erie House and the other historic structures. For the small non-profit, the financial costs and fundraising commitments were daunting. The Society raised several million dollars for the park's completion, while the NYS Thruway Authority funded construction of access ramps, parking lots, and other enhancements. Establishing a predictable and positive relationship between the Canal Society and larger state agency was key.

"Erie Canal Heritage Park is a monument to what can be achieved when the volunteer sector and government work together for common good."
- Thomas Grasso, President Emeritus, Canal Society of New York State 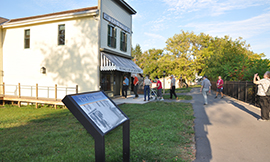 Visit the Erie Canal Heritage Park when traveling eastbound on the NYS Thruway. There is a dedicated exit between exits 40 and 41.