HomeLearnCanal Locks and Structures
New York's canal system is famous for its engineering.

Locks are elevators for boats, lifting and lowering them as they travel along the waterway. Today, there are 57 locks on New York's canal system, including 35 on the Erie Canal, 11 on the Champlain Canal, seven on the Oswego Canal, and four on the Cayuga-Seneca Canal.

Built between 1905 and 1918, 15 lift bridges still carry traffic over the Erie Canal in western New York. When a boat approaches, the operator stops traffic on the roadway and raises the deck of the bridge 15 feet to give clearance for passing boats. Stairs and walkways allow pedestrians to cross while the bridge is up.

Eight movable dams between Schenectady and Fort Plain regulate water flow on the Mohawk River. Dam gates are lowered into the river to form navigable pools during the summer but are pulled out of the water in winter to clear the way for ice and debris-filled floodwaters.

This type of gate helps to isolate sections of the canal in case of emergency, such as a break in the canal wall, accident, or extreme high water. They are also used when a section of the canal needs to be drained for maintenance or winter freeze protection.

Located at almost all locks, these white buildings house equipment used to generate electricity to power lock gates and valves. Nearby, you'll see a blue and gold gate cabinet, which displays the number of each lock. The cabinet holds the motors and gearing that open and close lock gates and valves.

Stone-walled locks built during the 1800s were replaced by much larger and fewer concrete structures between 1905 and 1918. You can see many early canal structures in parks throughout the National Heritage Corridor.

Since its grand opening in 1825, the canal has been enlarged three times. Changes were made to the route and canal structures each time. Learn more in the Gallery.

The New York State Canal System has been designated a National Historic Landmark. The designation places New York's operating canals among the premier historic sites in the United States. 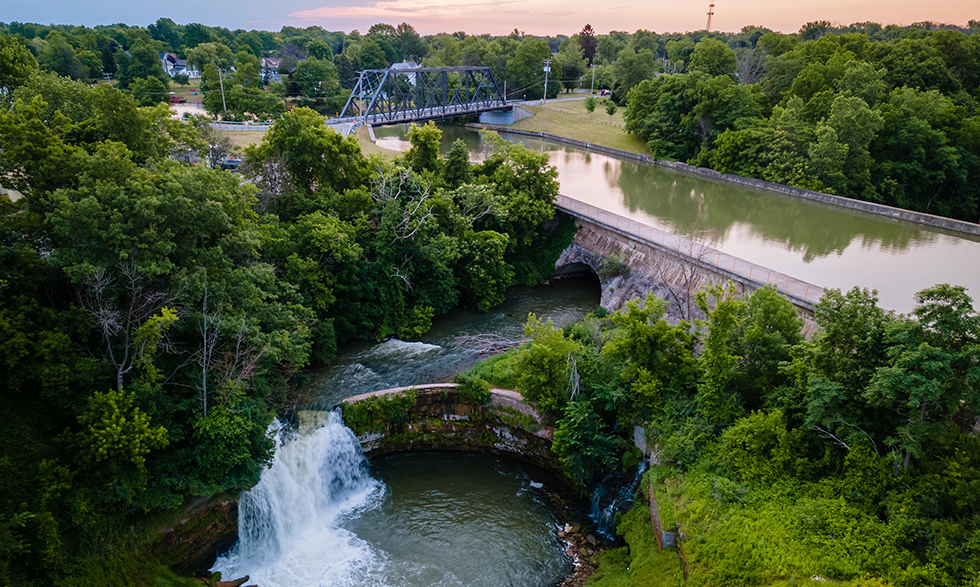