HomeLearnHistory and Culture
A National Treasure

Built between 1817 and 1825, the original Erie Canal traversed 363 miles from Albany to Buffalo. It was the longest artificial waterway and the greatest public works project in North America.

The canal put New York on the map as the Empire State—the leader in population, industry, and economic strength. It transformed into the nation's principal seaport and opened the interior of to settlement.

DeWitt Clinton was the Erie Canal's most persistent and effective promoter. A former NYS legislator, U.S. Senator, Mayor of New York City, and a member of the commission that oversaw the initial surveys for a cross-state canal, Clinton spearheaded the political effort to bring the canal into being. 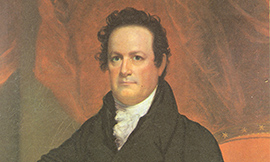 New York's canal system was a nationally and internationally significant work of engineering. Although its builders borrowed and adapted ideas and techniques from earlier European canals, they applied them with audacity on an unprecedented scale.

Some laborers were Irish immigrants, but most were U.S.-born. For eight years of wet, heat, and cold, they felled trees and excavated, mostly by hand and animal power, mile after mile. They devised equipment to uproot trees and pull stumps and developed hydraulic cement that hardened under water. With hand drills and black powder they blasted rocks. Their ingenuity and labor made the Erie Canal the engineering and construction triumph of its day.

The Lockport Flight was one of the most challenging parts of the canal to build. The staircase of five sets of locks was blasted through the solid rock of the Niagara escarpment. The locks lift and lower boats 49-feet. 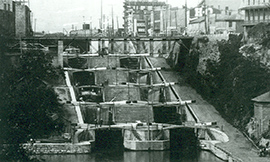 The Erie Canal became known as the "Mother of Cities" because it gave rise to so many cities, towns, and villages. 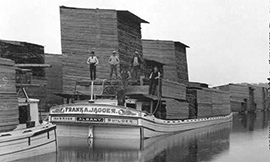 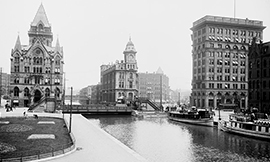 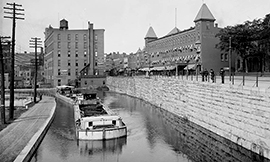 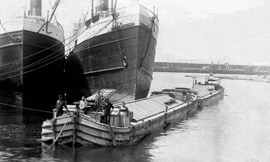 A Flow of People and Ideas

The Erie Canal and a system of connecting waterways fulfilled DeWitt Clinton's prophecy that New York would be America's preeminent state, populated from border to border and generating wealth for itself and the nation. Soon New York City was the nation's busiest port, most populous city, and foremost seat of commerce and finance. Immigrants knew they could find work there and in many new cities sprouting along the canal.

As it opened the American interior to settlement, the canal brought a flow of people and new ideas. Social reform movements like abolitionism and women's suffrage, Utopian communities, and various religious movements thrived in the canal corridor. The Erie Canal carried more westbound immigrants than any other trans-Appalachian canal. These newcomers infused the nation with different languages, customs, practices, and religions.

This half-hour documentary examines the spread of ideas along the Erie Canal, with an emphasis on women's rights, the right to vote, and the quest for social justice.

A New Kind of National Park

The U.S. Congress recognized the 's significance to our nation by establishing the Erie Canalway National Heritage Corridor in 2000. The Corridor stretches 524 miles across the full expanse of upstate , from to and north along the to . It threads more than 200 communities connected by a waterway that changed not just the landscape of our state, but also our nation and its history.

Thanks to the dedication of generations of canal workers and the support of people like you, the NYS Canal System remains one of America's greatest treasures. 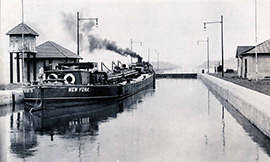 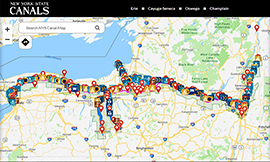 New York's famous canal system is still open for all types of boats. The towpath that mules once walked is now a 365-mile bike path.