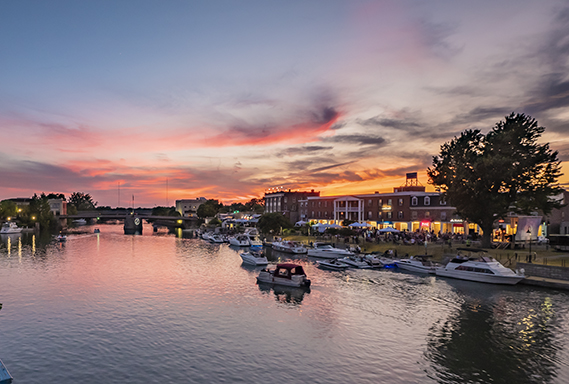 Gateway Harbor of the Tonawandas

Decades of collaborative investment and waterfront revitalization have built Gateway Harbor of the Tonawandas into a vibrant public space and regional destination. 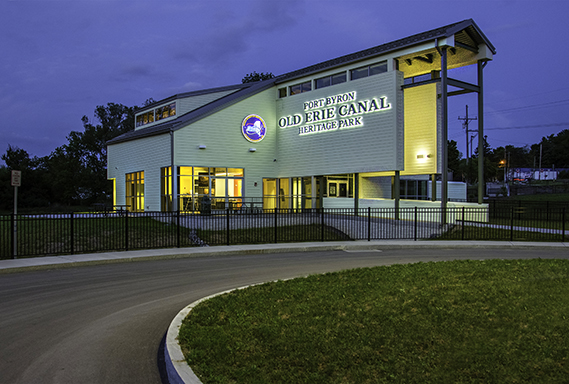 What was once an abandoned canal lock along the NYS Thruway is now a regional destination featuring a visitor center, restored historical buildings, and the unearthed Lock 52. 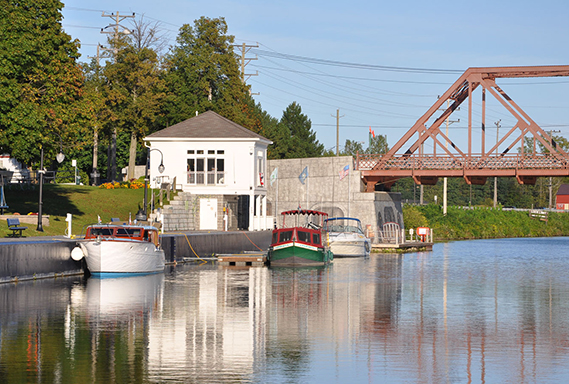 The Village of Newark capitalized on its canal waterfront resources to create a vibrant port sustained by a strong community, recreation and arts, and private partnerships. 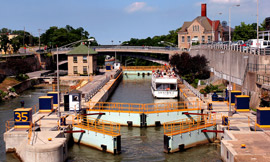 The Lockport Locks District has been the focus of highly successful economic investment, historic preservation, and community revitalization centered on Lockport's iconic locks. 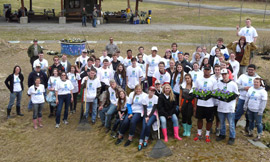 Once the site of neglected land, Hudson Crossing now serves as a unique recreational and educational destination on Lock C5 Island on the Champlain Canal and Hudson River. 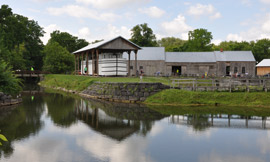 What was once an overgrown canalside lot, now showcases the only remaining boatyard on the Old Erie, a full-sized canal boat exhibit, and visitor center, and more. 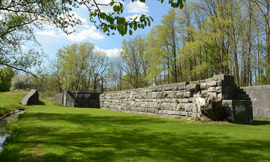 A 25-year preservation effort in the Town of Macedon showcases an authentic and irreplaceable part of our nation's canal heritage. 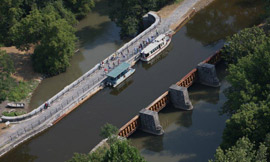 The restoration of the 1841 Nine Mile Creek Aqueduct is an extraordinary achievement in historic preservation and sustained public-private partnership between the Camillus Canal Society and Town of Camillus. 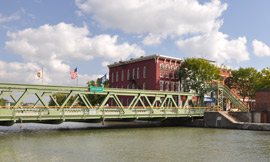 The Village of Brockport leverages its canal heritage for community revitalization and integrates historic preservation into the character of the Village. 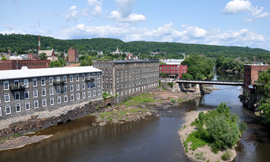 Canal Place is a destination for arts, culture, dining, shopping, and events thanks to citizen driven preservation and development efforts centered on 19th century stone mills. 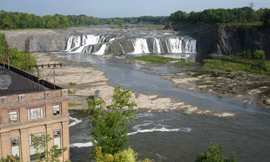 Managed by Brookfield Renewable Power, this facility serves as a model for corporate leadership in community revitalization and historic preservation.

Old Erie Canal Towpath at Butternut Drive, DeWitt (2015)
The Town of DeWitt has maintained a one-mile stretch of the Old Erie Canal State Park near Butternut Drive since 2012 and has made steady progress in enhancing the entrance to this important gateway to the Canalway Trail.

Bushnell's Basin Boat Dock & Canal Amenity Center, Bushnell's Basin (2013)
Bushnell's Basin has become a vibrant destination for Erie Canal travelers, thanks to outstanding planning and project implementation by the Town of Perinton, working in partnership with business owners and residents.

Trail of Hope, Lyons (2013)
The transformation of a forlorn parcel of land behind the community center in the Village of Lyons into attractive gardens and a fully accessible trail is touching the lives of the volunteers who create and maintain it and those who visit this "miracle garden" near the Erie Canal.

Delta Sonic Heritage Farm at the Buffalo Zoo, Buffalo (2011)
The third oldest zoo in the country tapped into Buffalo's canal history as the focus of its new children's exhibit: the Delta Sonic Heritage Farm. Opened in 2010, the family-friendly exhibit depicts life on a small family farm located on the banks of the Erie Canal in the mid-1800s.

Historical Murals of Lyons, Lyons (2010)
Historical scenes depicting life on the Erie Canal can be found on more than 25 buildings along the Erie Canal, thanks to a grassroots mural project begun in Lyons, New York. The epicenter of “Mural Mania” boasts eight murals, located within an easy walk of the canal and the Village of Lyon's Main Street.

Mohawk Towpath Byway, Waterford and Cohoes to Schenectady (2010)
Successful collaboration among eight municipalities is helping to preserve and showcase significant scenic, recreational, and historic resources along the Mohawk Towpath Byway. The Byway is a network of local, county, state, and federal highways that follow the historic route of the Erie Canal from Waterford and Cohoes to Schenectady.

Spencerport Depot and Canal Museum, Spencerport (2009)
Opened in 2006, this successful adaptive reuse of a former trolley depot now serves as a visitor center and canal museum on the Erie Canal. Volunteers logged more than 80,000 hours to bring the project to fruition, resulting in renewed community pride and a center for both residents and visitors to gather and celebrate Spencerport's canal heritage.