New York's canal system has been in continuous operation since 1825, longer than any other constructed transportation system on the North American continent.

Over the years, it has been enlarged three times to accommodate larger boats and more traffic. Today, pleasure boats, kayaks and canoes, and commercial vessels share the waterway. The NYS Canal System includes:

The NYS Canal System links the Hudson River with Lake Champlain, Lake Ontario, and Lake Erie via the Niagara River, allowing boaters to travel from the Atlantic Ocean to the Great Lakes.

Go Through a Lock

It takes about 15 minutes to go through a lock, but you can experience it here in one minute. 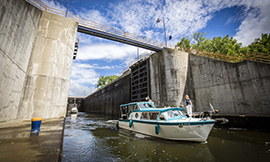 What makes the canal so unique?

Locks, lift bridges, and aqueducts, built between 1905 and 1918, are still in use today. Many canal structures used in the 1800s are preserved in public parks along the canal.