HomeLearnHistory and CultureSocial Reform and Innovation
The Erie Canal carried more than goods and people.

It was also a conduit for ideas. Several of the 19th century's most influential social reform movements started or flourished along New York's canal system, particularly in the central and western portions of the state.

The general prosperity and the cosmopolitan nature of the Erie Canal corridor-- which was experiencing dramatic growth and witnessing a flow of people from all over the Atlantic world-- created a climate where social innovation and questioning of the established order could flourish.

This half-hour documentary examines the spread of ideas along the Erie Canal, with an emphasis on women's rights, the right to vote, and the quest for social justice.

The women's rights movement traces its roots to Rochester and Seneca Falls. In 1848 a handful of women convened the First Women's Rights convention in Seneca Falls, demanding full and equal rights with men. They drafted the Declaration of Sentiments, denouncing inequities in property rights, education, employment, religion, marriage and family, and suffrage. The Declaration was signed by 100 women and men, and the women's rights movement was born.

Experts from various disciplines come together to discuss Floating Ideas: How the Erie Canal Shaped America.

Many upstate residents pushed for the abolition of slavery. Frederick Douglass lived and published for a time in Rochester as did Harriet Tubman, before she moved to Auburn. The canal towpath served as one of the routes of the “Underground Railroad,” used by escaped slaves attempting to reach sanctuary in Canada.

Religious revivalism swept the Erie Canal corridor with such intensity during the “Second Great Awakening” of the 1820s and ‘30s that western New York came to be called the “Burned Over District.” Evangelical sects, millenialists, and new religious groups such as the Latter Day Saints (Mormons) and Seventh Day Adventists were started in canal communities and spread their message along the waterway. Perfectionist groups like the Oneida Community flourished near the canal.

Visit Women's Rights National Historical Park in Seneca Falls to experience the place where women and men came together to call for equal rights. 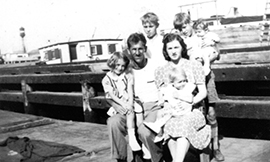 Women on the Canal

From cooks to cabin maids to captains, women have long played vital roles on the canal. View this digital exhibition from the Erie Canal Museum.