New York’s canal system was a nationally and internationally significant work of engineering.

Although its builders borrowed and adapted ideas and techniques from earlier European canals, they applied them with audacity on an unprecedented scale through a region that was still largely wilderness.

The initial construction of the Erie Canal between 1817 and 1825, and successive campaigns of improvements and enlargements throughout the 19th century, served as a training ground for many of America’s most active and productive engineers.

Started at a time when the military academy at West Point offered the only formal engineering instruction in North America, New York’s canal system provided practical schooling to a generation of designers and builders. It also led to the founding of Rensselaer Polytechnic Institute (RPI) in Troy (1824) and the introduction of engineering at Union College in Schenectady (1845), the nation’s first civilian engineering schools. The sciences of hydrology, geology, and paleontology were dramatically influenced by experiences gained during construction of the Erie Canal.

Benjamin Wright, who gained experience with the Western Inland Lock Navigation Company during the 1790s, served as Chief Engineer of New York State Canals from 1817-28 and as consulting engineer on the Farmington, Blackstone, Chesapeake and Delaware, Chesapeake and Ohio, Delaware and Hudson, Welland, and St. Lawrence Ship Canals. Canvass White, Nathan Roberts, John B. Jervis, James Geddes, and others served apprenticeships on the Erie before going on to design and supervise construction of other important canal, railroad, bridge, and water supply projects throughout the country.

Management on an Unprecedented Scale

Beyond their initial construction, operation of New York’s canals required administration and management of a complex technological system on an unprecedented scale. Control of water resources, maintenance, toll collection, and administration of property, employees, contractors, and boaters on a network of more than 500 miles of artificial waterways (700 miles by the 1850s) required development of new procedures that would see later application in railroads, communication companies, public utilities, and government. 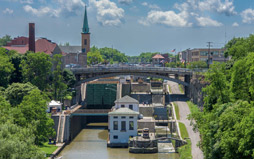 The Lockport Flight was an engineering marvel and a point of pride for a young state and nation. It was pictured in artwork, prints, and decorative objects. It made Lockport a popular tourist destination for travelers from around the world. You can still see these remarkable locks today.